Some of the Problems We Face

“We have to stabilize emissions of carbon dioxide within a decade, or temperatures will warm by more than one degree. That will be warmer than it has been for half a million years, and many things could become unstoppable. If we are to stop that, we cannot wait for new technologies like capturing emissions from burning coal. We have to act with what we have. This decade, that means focusing on energy efficiency and renewable sources of energy that do not burn carbon. We don’t have much time left…”

So what are those “things” Dr. Hansen is saying could become “unstoppable”? First, there’s…

The Things We Know 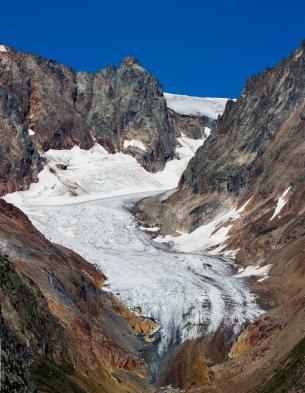 We know that Greenland, Antarctica, the Arctic Ice Cap and glaciers that supply billions of people, animals and plants with water are melting, shrinking and disappearing due to global warming. We know they’re doing so at faster and faster rates because white ice absorbs only 20% of solar heat. When it melts though and becomes darker earth or ocean water as in the Arctic, it absorbs 93% of solar heat— a huge difference! The result is the Earth absorbs even more heat which speeds up global warming which makes them shrink even faster and so even less water for rivers, lakes, animals, plants and humanity. This is one of many vicious circles aka positive feedback loops that happen with global warming.

We know that in the Arctic, permafrost, permanently frozen polar land, is melting and releasing CO2 and methane, 23 times more heat-trapping than CO2, which in turn makes the permafrost melt even faster. We know forests are world wide being burned and cut down. The burned wood adds more CO2 to the air plus there’s less trees so there’s also less absorption of CO2. This leaves more CO2 in the atmosphere which accelerates global warming, again leading to drier conditions, more forest fires and feeding itself, even more global warming .

These aren’t the only threats from global warming. Because the oceans are also getting warmer, and warmer water absorbs less oxygen, they’ve become less oxygenated. A British government study recently found that plankton, the basis for most sea life which prefers oxygen and colder water and also absorbs half the world’s atmospheric CO2 has been 73% wiped out since the 60’s and 50% since 1990! Yet another vicious circle: less plankton means more global warming which leads to even less plankton still.

Add to lower overall oceanic oxygen huge amounts of artificial fertilizers and industrial pollution washing out to sea and we now have increasing low-oxygen zones and no-oxygen dead zones,  now around 400 and roughly doubling each decade. Both kinds of zones severely reduce sea life and fisheries.

Because of its increase in the air, the oceans are also absorbing more CO2 and becoming more acidic. This hurts the ability of sea life to make shells and coral reefs, the world’s largest living structures and second richest storehouse of biological diversity.  It’s reported that reefs are so threatened by not only increased acidity but also by overfishing and pollution that we could lose 70% of them by 2050.

Another result of global warming is sea levels rising because of melting glaciers and sea ice and the expansion of water due to higher temperatures.  This could result in a potential 30 foot rise that would cause 634 million people world wide including 23 million Americans to be living at or below sea level. Many would be forced to migrate due to storm surges, floods with many having nowhere to move to. (How many millions of these refugees would we be willing to take in while relocating our own 23 million?) 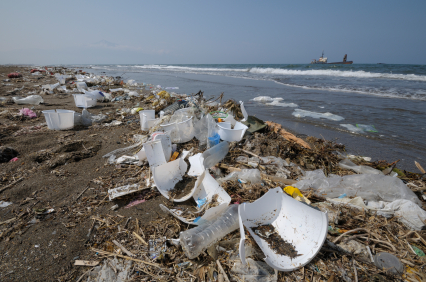 Some other problems on the seas are pollution from wind blowing and rivers carrying garbage down to the sea, untreated sewage and ship discharges and overfishing with 80-90% of the world’s major fisheries at risk of being wiped out.  There’s also five huge oceanic gyres covering 40% of the world’s oceans with little wind or current where it’s estimated 10% of the world’s plastic is now accumulating, getting smaller but not breaking down. In each gallon, they’ve found up to six times more plastic than plankton with the water becoming even more toxic as the plastic bonds with the pollution. As its discoverer Charles Moore put it, “25 percent of our planet is a toilet that never flushes”.

If all this weren’t enough, our world’s deserts and drought-prone areas are expanding from 15% of all land on Earth to 30%, water tables world wide are dropping fast threatening an even worse situation as in seven of the last eight years world grain production fell below demand.

Indeed, the American Academy of Sciences concluded that since 1980, we’ve been consuming resources, fresh water, fish, trees, soil etc. faster than the natural world can replenish them with this “global overshoot” getting larger and larger. And the list goes on…

The Things We Know We Don’t Know

And then there are the things we know we don’t know. There are over 62,000 chemicals circulating in our water, air, food, products and economy that were never tested for health effects on pregnant women, children, adults or the environment! Not only have they never been tested individually, they haven’t been tested in conjunction with the thousands of other chemicals circulating.

This is a problem because two chemicals that aren’t harmful on their own can become harmful combined. These 62,000 chemicals in the U.S. alone are enough to fill 623,000 tanker trucks not over a year but every day!

Out of the thousands that were designed to be toxic like pesticides and herbicides and the many others suspected of being carcinogenic and/or mutagenic, the National Center for Disease Control did a test in 2005 of only 148. They found the vast majority of a broad selection of Americans had almost all 148 in their blood! As Dr. Trasande, assistant director for the Center for Children’s Health and the Environment at Mt. Sinai Medical Center put it:

“We are the humans in a dangerous and unnatural experiment in the United States, and I think it’s unconscionable…Rates of asthma, childhood cancers, birth defects and developmental disorders have exponentially increased, and it can’t be explained by changes in the human genome. So what has changed? All the chemicals we’re being exposed to.” We are a nation and world of guinea pigs.

Then there are things we don’t even know we don’t know. For example, who even imagined that propellants in a spray can could help destroy the life-protecting ozone layer high up in the atmosphere? Or that coastal deforestation affects interior rainfall? Unfortunately, these problems get discovered only after they crop up, and then, it’s too late. But there is a couple of things we do know. Logic, experience and the law of unintended consequences tells us the more chemicals we recklessly use without tests and the more changes we recklessly make to the Earth’s major ecosystems, again without any tests, the more unintended consequences we’ll have to deal with. By continuing this uncontrolled experiment on ourselves and our world, we’ll continue to discover after the fact new problems we often had no idea could even crop up.

WWIII or The Human Race For A Healthy Planet?

Tweaking Thomas Friedman’s metaphor, we’re in an overcrowded bus conducting an uncontrolled experiment on ourselves while a number of different gas pedals are all jammed to the floor while we’re speeding through a fog towards a cliff. We don’t know exactly where this literal point of no return is but we know we’re rapidly approaching it.

Once we go over this tipping point, there will be little if anything we can do to stop the following from increasing: temperatures, spreading deserts, drying, dying and burning forests, droughts, new plagues of insects, crop failures, mass starvation, epidemics of new and old diseases and various unintended consequences from all the above, including those from the sixth mass extinction of life since life began, this time man-made with a projected 30-40% of all species going extinct this century.

Nor will we likely be able to stop WWIII — a perfect global storm of  catastrophes with failed states, mass migrations, riots, terrorism, nuclear blackmail and yes, wars for increasingly scarce water, food, land, oil and other natural resources — or wars that are really about these but are disguised as wars over politics, religion, nationalism, borders etc. In fact, Iraq is already a testament to this as Alan Greenspan recently wrote in his memoirs “’I am saddened that it is politically inconvenient to acknowledge what everyone knows: the Iraq war is largely about oil.”  Haiti is also a preview of what’s to come when failed states face the man-made disaster of global warming/poisoning.

But all this isn’t inevitable. We can and must prevent this veritable World War III described above or we and our children will experience it first hand.  In fact, we’re already beginning to experience it. (See What We Face.) Anything less than our very best effort may not be enough so for the sake of our children, their future and their children, we need to give this our all and mobilize to save civilization with post-Pearl Harbor urgency.  This needs to be a world wide Human Race For A Healthy Planet.